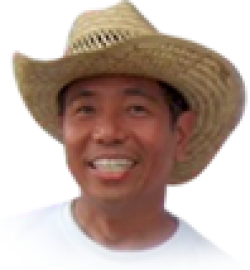 
We interviewed Slap Yo Daddy BBQ!

Hello Slap Yo Daddy BBQ, so tell us...

Tell us a little bit about what it takes to be a true pitmaster.

In my opinion, to be a true American pitmaster, you’ll have to 1) appreciate the humble origins of American barbecue and its place as the only true authentic American cuisine, and 2) how to cook meats on the grill and in the smoker to create a wonderfully tender, moist, and delicious end-result that explodes in a symphony of flavors in the mouth.

What is your favorite thing to grill?

I love to grill ribs the low and slow style. There is nothing more tasty than a tender rib cooked for 5-6 hours until it melts in your mouth. I have numerous beef and pork rib recipes on SlapYoDaddyBBQ.com that showcase easy low and slow cooking methods in a grill.

What are your culinary influences?

I grew up on the tropical island of Penang in Malaysia which is aptly nicknamed the Pearl of the Orient. It’s a well-known food Mecca in South East Asia due to its extensive cosmopolitan food scene and is a favorite destination for food celebrities such as Anthony Bourdain. The fusion of Chinese, Malay, Eurasian, and Indian indigenous traditions has created a diverse variety of specialty dishes that intermingled with the cooking influences of the Dutch, Spaniards, Portuguese, and British who colonized Malaysia in successive waves. I grew up eating foods that were very spicy and aromatic with curry spices and coconut milk.

You won TLC's BBQ Pitmaster. What was that like?

I was stunned to win Season One of TLCs BBQ Pitmasters. I’m from California and was the fish-out-of-water underdog among the 7 teams of full-time pro cooks which included three World Champions. I took my fair share of friendly jibes from the other top barbecue teams ready to show me how real BBQ was done since I supposedly hailed from the California land of tofu and artichokes. Boy were they surprised when in Episode Eight, I won the season finale in Texas cooking ribs against some of the best rib cookers in the world!

What is your earliest food memory?

My earliest food memory is growing up eating and loving barbecue of every kind. I grew up enjoying satay and meat and seafood grilled in banana leaf over open coals. When I arrived in America in the 80’s, after being laid off as a 747 pilot with Singapore Airlines, I attended Texas Tech University to study computer science. My classmate took me out for some Texas brisket and I instantly fell in love with American barbecue. I still pinch myself that my love for barbecue eventually took me on journey to win 80+ first places and 27 Grand Championships including awards in London, Canada, Hawaii, and the US.

Do you have a secret ingredient, a product you use a lot that is unexpected or that helps you save time?

Let me share a top secret ingredient with the readers. I use a spice that's commercially grown on the island of Penang in Malaysia where I was born. This ingredient was highly prized and very costly in European medieval cooking, and where it was grown was top secret. Muslim traders and sailors (origin of the fictional character Sinbad) brought the spice to Europe and sold them for skyrocketing prices. No European knew where the location was until 1511 when Afonso de Albuquerque of Portugal conquered Malacca, a state of Malaysia. He commandeered some locals to take his sailors to the Banda island where the trees which grew this mythical spice was found. The spice trees were transplanted to Penang where it is now a commercial crop and that started Penang's nutmeg industry. I use nutmeg from my hometown Penang as a secret ingredient to create award winning barbecue flavors!

My motto is "C-food Eat-food". I love all food, including durians!

What advice would you give to a BBQ novice?

The best advice I have for the BBQ novice is to remember that smoke is like salt. Just like you would never want to over salt the food that you cook, you should never over smoke your meats when you grill. You want to kiss your meat with smoke and not douse it so it overpowers the flavor of your meat.
The number one mistake I have seen in teaching barbecue classes the past 7 years is that novice pitmasters often over smoke their meats. Remember that Harry said, "Less is More."

My worst food flop was...

My worst food flop was finishing poorly on national TV among 500+ teams in the largest contest in America at the prestigious American Royal Kansas City in 2010. I was shooting BBQ Pitmasters and was situated beside a team that was having a corporate party for 300 persons. The only barrier separating my canopy from the live bands that played for two straight days was a thin fabric wall between my booth and my neighbor's corporate party. During the 3 days of competition cooking and shooting of two back-to-back episodes of BBQ Pitmasters at the American Royal, I got little sleep due to the noise and crowds of party goers and the public that kept wanting to "slap the Daddy". I overslept and missed my cook timings and ruined some of my barbecue entries on national TV!

In my barbecue journey, I've won many awards, travelled around the world, and met many people. This only came about by accident due to my co-worker Teri Bishop who dragged a bunch of us Dilbertesque IT nerds into a conference room in 2008 after she saw the movie the "Bucket List" featuring Morgan Freeman and Jack Nicolson. She said she saw a great movie and we should all make up our bucket lists. To make it interesting, we should write stretch goals for each other. My co-workers wrote down "Harry should cook a barbecue contest like the ones you see on TV."
I forgot about my goals until the next "status" meeting that Teri scheduled. I eventually got tired of explaining why I was not completing my goal so I decided to cook one contest to get her off my back. When I filled up the entry form, I put in my team name as the "Bucket List" because it was a one-time throwaway name. My co-workers said it was a boring name. I was told that in the South, when you eat something you really like, you want to slap somebody. Since I was a Daddy, they told me to call my team "Slap Yo Daddy BBQ".
I really didn't care what my team name would be as I would only use it one time in my first and only barbecue contest in Palm Springs, California. Long story short, I cooked my first contest and finished Reserve Champion and 1st place chicken. The rest, as they say, is history.
My barbecue journey is really in tribute to Teri who was full of energy, life, kindness, and optimism. She passed away from cancer in 2011. Despite all the awards I've won, I've learned that, in life, the only things that matter are not the things you gather such as trophies, titles, houses, cars, fame, or more trailing zeros in your bank account. Nothing that you have can be taken with you when you finish your short stint on Earth. We all have an expiration tag on our toe. We just don't know what date it says.
Mrs. Helen Walton, of the Walmart and Sam's fame, said it best when she said, and I paraphrase, "your life is measured not by what you gather, but by what you give away." I learned at mid-life that I have a talent to cook barbecue. I also discovered that my journey in life is not to gather more but to give it away in the remaining time that I have.
When I was asked by my co-workers to show them how to barbecue in 2009, I thought I would be fun to do it couple of times a year. By word of mouth and positive Internet reviews since then, I've ended up teaching over a hundred classes, hands on, to small groups of dozen students in one-on-one sessions. I now have 1,500+ ambassadors of barbecue happiness ready to spread joy and love in the world. And I've been able to help a couple of my favorite charities with part proceeds from these classes.
I created SlapYoDaddyBBQ.com in 2009 to share my recipes and blogs to "give away" my knowledge because I know it's not mine to keep but to share to spread to more love and kindness in the world.
In my life journey since Teri, I've learned to not focus too much on gathering material things but to gather the eternal things that truly matter such as relationships, love, and memories. So I intend to give away my barbecue knowledge, on my website and other means, for as long as I can so that you too, can spread love and joy in this world.

Thank you Slap Yo Daddy BBQ for answering our questions and see you soon!
Published by Gitanjali - 09/25/2014


If you are a blogger, a chef, working in the food industry or have a website about food and cooking, and you would like to share with our community, please contact us!
We would be happy to feature you on our site.

Texannie
From the blog: Gambas and Grits