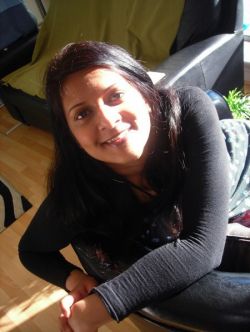 "Sure, there is a little bit of effort in the beginning but the rewards quickly outweigh the effort."

Hello Lovlie, so tell us...

You said that your blog was inspired by your decision to become vegan, can you explain why you chose that lifestyle?

My story is probably no different from many vegans who chose this path. As much as some people say that the harsh method of showing graphic videos of animal cruelty is not going to persuade people into a vegan lifestyle, this is what did it for me. After watching how animals were mistreated and kept in inhumane conditions on factory farms, I became vegan overnight and never looked back on this.

Are you involved in the blogging community - how do you attract new readers?

I regularly read blogs from other authors and comment on their posts. I also raise awareness about veganism by making my own graphics (being a designer) and sharing them on my social media. Engaging with my audience in this way has attracted new readers every now and then. Apart from this, I personally have found Pinterest to also be a great tool in that regard.

Who are your culinary influences?

I have been influenced mostly by the amazing array of delicious local foods of my home country – Mauritius. When I left home to go abroad, the one thing that I could not forget was the local dishes. Even from my early days as a college student away from home, I was making scrumptious meals which my flatmates very much enjoyed. Then my mum has been my very first influence in cooking in general although not vegan. She was known in the family for her tasty dishes. Apart from her, I really look up to chefs like Nigella Lawson (although not vegan) for her charisma. I am also a great fan of Isa Chandra Moskowitz and Hannah Kaminsky.

If you could be a contestant or guest on any cooking show what show would you choose?

That's a difficult one! As I am more of the introvert type, I would probably be terrified to be a participant on a cooking show. But if I had to choose, I'd go for Masterchef.

What is your earliest food memory?

The local Mauritian fruits I used to eat as a child. The earliest one I could remember is tamarind that I used to pick from the trees in the kindergarten yard. I was probably 3 or 4 years old.

Do you have a secret ingredient, a product you use a lot that is unexpected or that helps you save time?

I in fact have two: lemon juice and paprika. I use both in a lot of recipes that wouldn't usually call for them. Lemon juice is also a key ingredient in a lot of vegan baking for its chemical reaction. You can't go wrong with a dash of lemon in sauces, vinaigrettes and other dishes. As for paprika, I find that it enlivens most sweet dishes and salad dressings with that little extra oomph!

How long did it take you to become fully adapted to a vegan lifestyle, without relying upon recipes, tips, and advice?

The diet has been the easiest part and mine is solely vegan (there isn’t something as a partially vegan diet anyway!). But all the rest is an ongoing process. For me a vegan lifestyle is also about making the right eco-friendly choice and choosing to buy local as much as possible. The fact that I have been moving to different countries since I went vegan has made it a little challenging to adapt to the lifestyle. I try to find vegan options as much as I can but it can sometimes be difficult to find vegan substitutes for products every time I move to a new place. Since a year now, I have been making my own face moisturizers from essential oils and plant butters. I also use baking soda and vinegar to wash my hair if I can't find vegan shampoo. In this way, when I have to travel, it makes a vegan lifestyle less challenging.

How do people respond when you tell them you are vegan?

Well, it really depends on the person and how much they know about veganism. But what I’ve realized during my seven years of being vegan now, is that it also very much depends on the way I respond to them in return. I am mostly of a calm and patient nature; I like to take my time to explain the choices and reasons with some insights on substitutes and recipes. So I get quite mixed reactions. Most are curious, some are appreciative, while others would still just think they won’t be able to give up such and such food. Some people think that I am vegan for religious purposes, which of course is not the case. Overall, I find that there has been a shift in how people are perceiving veganism in general nowadays.

What are your goals for your blog? Where would you like to see it in the next year? Five years?

Truly speaking, I am not someone who has big set plans in my mind. I enjoy the simple moments that the day brings and go with the flow. So far I have enjoyed this sweet ballad of blogging about my recipes and crafts. For sure, I like to make people happy with delicious food and cute vegan crafts – I will be blogging for as long as it resonates within me. I am just as curious to know where this path might lead me in five years from now.

You don’t have to be vegan to give vegan food a chance. I cannot think that there are some people who would just refuse to even try something new. Every time I’ve brought vegan cupcakes to my workplace, people have been amazed at how they are no different from non-vegan ones. And that goes for many other aspects of the vegan lifestyle. Sure, there is a little bit of effort in the beginning but the rewards quickly outweigh the effort.

Thank you Lovlie for answering our questions and see you soon!
Published by Jill - 05/02/2014


If you are a blogger, a chef, working in the food industry or have a website about food and cooking, and you would like to share with our community, please contact us!
We would be happy to feature you on our site.