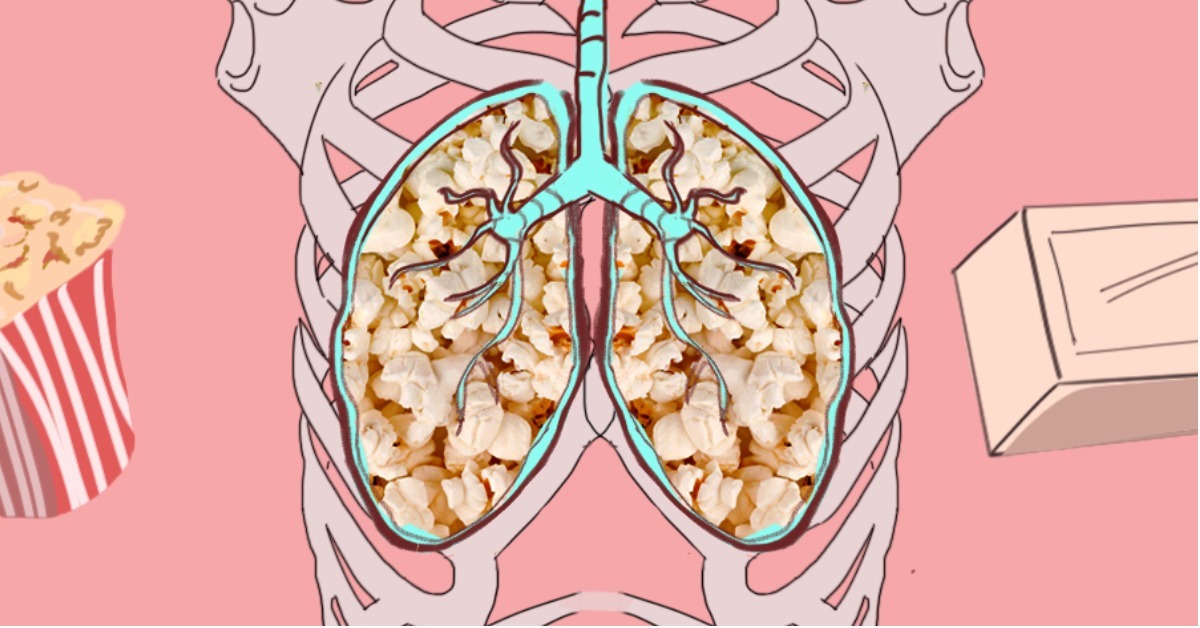 "Popcorn Lung" Is Real, And It Might Be Affecting You

You don't have to eat popcorn to get it.

We know, we know: the term "popcorn lung" sounds a little too absurd to be real. But this disease is not only serious, it's potentially lethal. And it's on the rise.

What Is Popcorn Lung?

Bronchiolitis obliterans, or "popcorn lung," happens when inhaled chemicals scar the smallest airways within the lungs (bronchioles) and reduce their ability to deliver oxygen to the body.

While there are medications that can slow the progress of the disease, unfortunately there is no cure. In some cases, a lung transplant may be called for.

How Was It Discovered?

In 2000, eight employees at the Gilster-Mary Lee popcorn plant in Missouri were discovered to have the disease.

We know what you're thinking... "But I don't work in a popcorn factory!" Unfortunately, that doesn't mean anything.
In 2012, Wayne Watson of Colorado won a $ 7 million lawsuit for developing popcorn lung after spending 10 years eating two bags of popcorn a day.

His doctor said, "I had a very complete history, including a history of work and an environmental story and I did not find anything. And it was not really until the end of his initial medical evaluation that I turned to him and asked him: 'Were you exposed to or around a lot of popcorn?' And his jaw fell open and he asked me how I could know that about him. "

So How Do You Get It?

Bronchiolitis obliterans is the result of inflammation and lung injury caused by exposure to many different chemicals, including:

It's diacetyl, the chemical used to give that "buttery" taste to microwave popcorn, that gives this disease its name.

Unfortunately, popcorn munchers aren't the only ones at risk here. Diacetyl is commonly found in both cigarettes and e-liquids used in vapes (or electronic cigarettes).

What Are the Symptoms?

The symptoms can be difficult to detect, but can include:

It should be pointed out that this condition is often caused by extreme popcorn consumption. Still, it's best to stay safe and avoid chemically-manufactured food where possible.

Pop your kernels at home, and flavor them with these homemade recipes!

Popcorn isn't the only food that's full of chemicals. Have you ever wondered what's actually in Coca-Cola?

6 Alarming Signs That You Have A...

Should You Drink Alcohol After You Exercise? Cooking ProTip: You Should Never Cook With This Kind of Wine