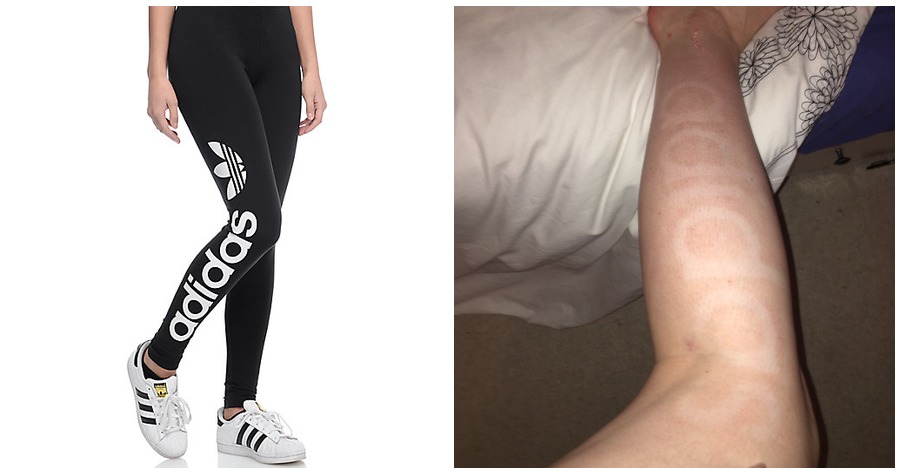 One woman's spray tan blunder reminds us that, sometimes, it's better to leave the tight leggings at home.

that’s the last time a work out with tan on btw ahahah pic.twitter.com/1y291bdZYw

When the sportswear company adopted the slogan "Adidas is all in," they probably didn't intend for their customers to wear their brand quite like this. But this is exactly what happened when Scotland-based Eve Mallon donned a pair of Adidas leggings soon after getting a spray tan.

The result? The iconic "Adidas" logo from the leggings became imprinted on her skin!

Eve Mallon is not the only woman to have experienced such mishaps! Shortly after she sent out her tweet, another Twitter user by the name of Eden Chicken replied with a similar photo or her own unintended spray tan "tattoo."

Although it's advisable to avoid wearing tight clothes after getting a tan, it's not something you'd usually think about before hitting the gym. Eve must have not realized this could happen, resulting in (what Adidas believes to be) a very fateful day.

The company had a hilarious response to Eve's photo, tweeting back, "We’d say it’s fate. Way to rep the Three Stripes, Eve. We see you."

If that's no consolation for her spray tan mistake, we don't know what is — except, perhaps, knowing that it's only temporary!

Did you enjoy this article? Here's when you should avoid wearing a thong at all costs.

Get Down and Nerdy With Harry Potter...

Only 3% of people can SPOT the hidden...