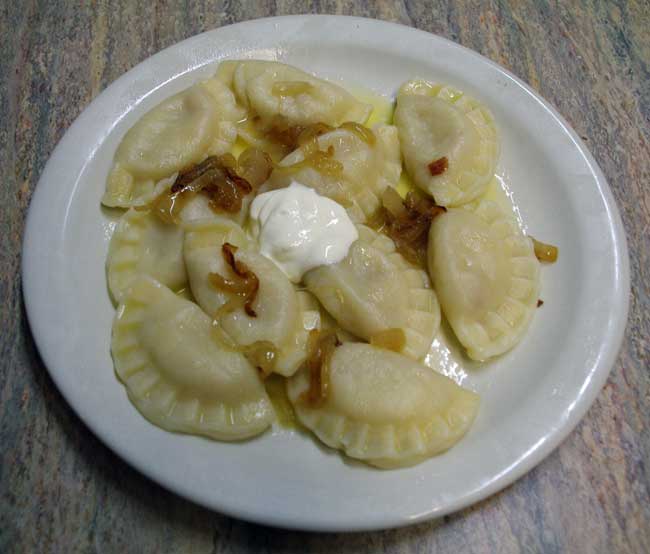 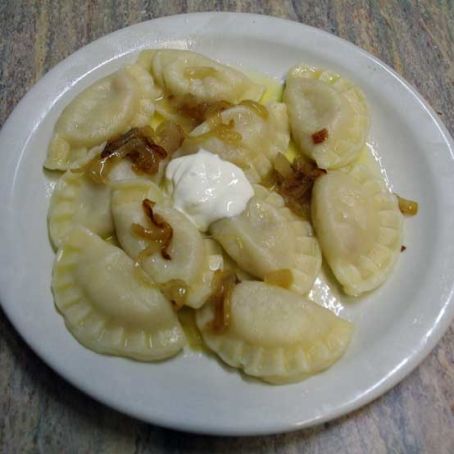 Blend the flour and 1/2 tsp salt. Add the egg yolks and the oil through the feed tube. Then,pour in the water, in a slow steady stream, until the dough forms a ball around the blade. Transfer the dough to a floured surface and knead until smooth, about 2 minutes. Cover with a cotton towel and let stand for 30 minutes.

Divide the dough in half and shape into two balls. Keep one ball covered with the towel while working with the other ball. On a floured surface with a floured rolling pin, roll out the dough to a very thin sheet, about 1/16 inch thick, making sure it doesn't tear. With a round cookie cutter, cut out circles about 3 inches in diameter. Gather the scraps into a ball and set aside, covered.

Have a bowl with the egg white near you. Place a heaping tsp of the desired filling in the middle of each circle. Fold the dough over the filling to form a semi-circle. Brush the edges with the egg white and press the edges firmly together with the tines of a fork to seal. Place the vareniki as they are made on a lightly floured large baking sheet about 1 inch apart and keep covered with a damp cloth.

When you have finished making this batch of vareniki, roll out the 2nd ball of dough and make a second batch. Add the leftover scraps left from the first batch, knead into a ball, and roll out for a final batch of vareniki.

Meanwhile, in a large pot, bring 6 quarts of salted water to boil.

Reduce the heat to medium so the water simmers and carefully lower half the vareniki into the water. Boil, stirring occasionally with a wooden spoon to prevent sticking, until they rise to the surface, and are cooked through, 6 to 7 minutes. With a slotted spoon, carefully remove the vareniki to a colander and drain thoroughly. Transfer to a deep serving bowl and toss with half the butter.

Cook the rest of the vareniki in the same way.

For the Potatoe Filling:
Melt the butter in a small skillet over medium heat. Add the onion and saute, stirring occasionally, until nicely browned, about 15 minutes. Remove from the heat and let cool slightly.

In a large bowl, combine the potatoes and cheese. Add the sauteed onion along with the cooking fat and mix well. Season with salt and pepper, then use to fill the vareniki.

For the Sauerkraut Filling: Rinse and squeeze thoroughly to dry the sauerkraut.Saute the bacon in a large skillet over medium heat until it renders its fat. Remove the bacon and reserve. Drain off all but 2 Tbsp fat. Add the onion to the skillet and saute, stirring frequently over medium heat until nocely browned, almost 15 minutes. Turn the heat up to medium-high, add the sauerkraut, and saute, stirring, until softened and cooked throughout, 10 to 15 minutes. Stir in the tomato paste, sugar, and broth. Reduce the heat to low, then cover and simmer for 20 minutes. Remove from the heat and cool to room temperature before using to fill the vareniki. Use the reserved bacon as a topping.

You Should NEVER Eat These Foods Before Going To Bed!