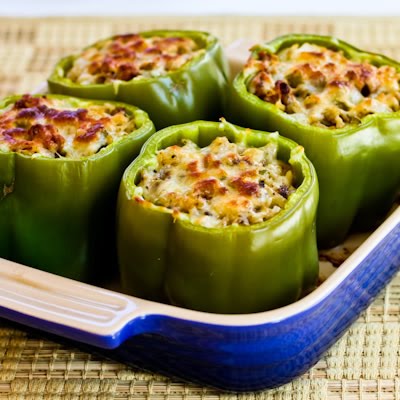 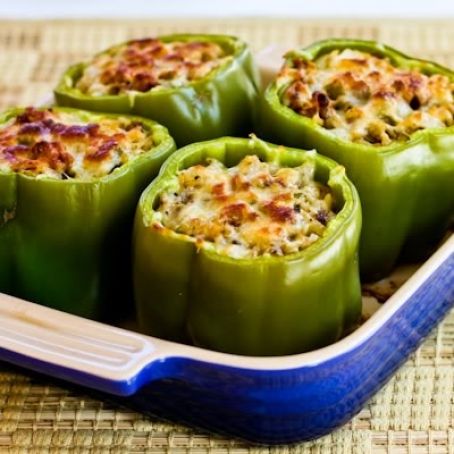 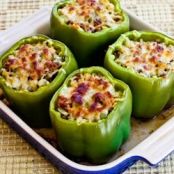 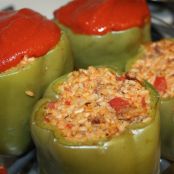 Cook rice according to package directions, or using a rice cooker. (Rice can be cooked ahead and used in this recipe later.)

Preheat oven to 375F/190C. Trim bottom of bell peppers so they have a flat surface to stand on. Cut off a fairly generous amount of the stem end of peppers, then remove seeds. Place hollowed-out peppers in a baking dish that you've sprayed with non-stick spray or olive oil. (A dish that's close in size to the peppers will work best.)

Remove stem part from the pepper caps and trim off any white membrane, then dice pepper caps and the onion into fairly small dice. Heat 2 tsp. olive oil in a large skillet, then saute diced pepper and onion for 3-4 minutes, until they are starting to soften but aren't browned. Remove pepper-onion mixture to a bowl, add 1 tsp. more olive oil, then squeeze sausage out of the casing and cook until it's lightly browned, breaking apart with the back of the turner.

Put the onion-pepper mixture back into the pan with the sausage, add the dried spices, and saute 2-3 minutes to blend the flavors. Then add cooked rice and Parmesan cheese, season the mixture with salt and fresh ground black pepper to taste, and cook just long enough to warm, about 1-2 minutes.

Stuff the filling mixture into the hollowed-out peppers, using a spoon to press the mixture down so it's tightly packed into the pepper shell. (A few years ago I stopped pre-cooking the peppers before stuffing, and now I prefer peppers that are stuffed raw.) If you have any extra filling, you can put it in a small ramekin and bake along with the peppers. Bake peppers for 30 minutes, then remove from oven and put a generous pinch of grated mozzarella on top of each pepper. Put peppers back into the oven and bake about 10-15 minutes more, until cheese is melted and lightly browned. Serve hot.

You can freeze leftover peppers for a month or two, although the frozen peppers will be a little softer in texture (but still very tasty.) I cut them in half top-to-bottom before freezing and freeze two halves in a small baking dish with a snap-on lid. 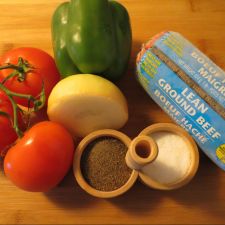 How to de-seed and dice a tomato

17 crowd-pleasing recipes that start with a loaf of bread