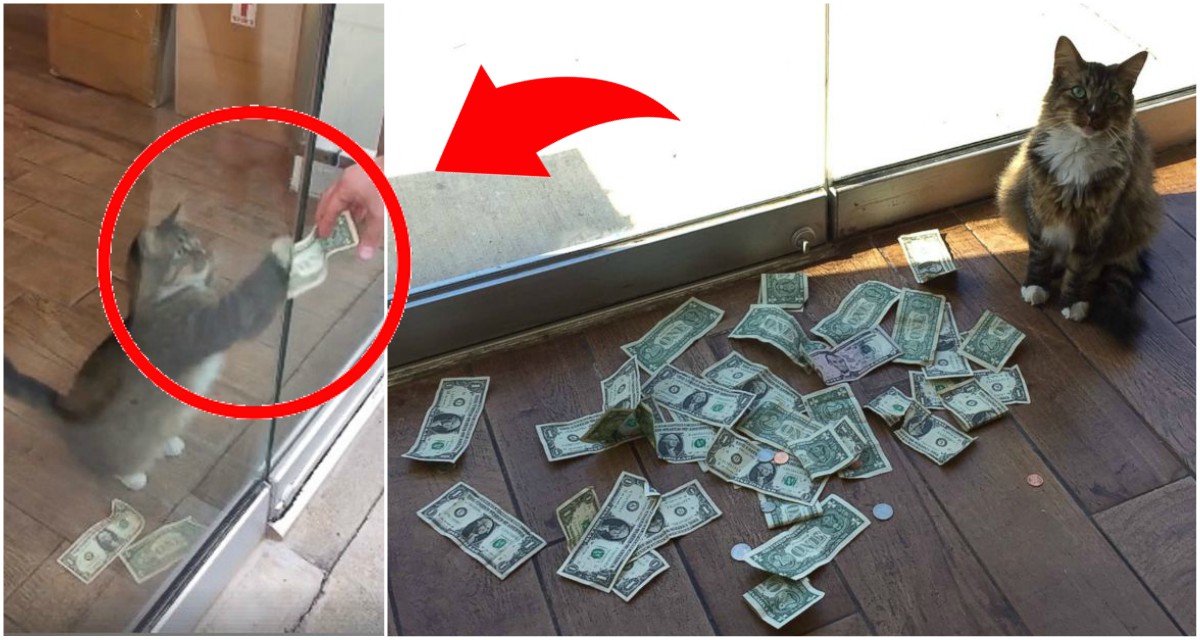 Meet Sir Whines A Lot, the cat with a thing for cash who is raising money for charity.

Sir Whines A Lot is a cat with a serious thing for money.

A while ago, this sweet-tempered rescue cat started hanging out at his owner's family business, the marketing firm GuRuStu, in Tulsa, Oklahoma. That was when his secret obsession was first revealed...

"I get a call from my dad saying, 'Why is there money on the floor at the office? There's at least $5 on the floor near the glass, where you can slip it through,'" the cat's owner Stuart McDaniel said to ABC.

Apparently, people had been trying to play with the curious kitty through the glass – by offering him dollar bills!

That was when Stuart and his sister had an idea: if people liked playing with Sir Whines A Lot, and the kitty had fun with it too...why not use that for a good cause?

They began donating the proceeds to the Tulsa Day Center for the Homeless. The company also started sharing videos from people on Facebook showing their funny exchanges with Sir Whines a Lot.

They also put up a sign to encourage people to play with him and telling people the cause their money would be going towards:

The "Cashnip Kitty" is gaining quite a few fans in the local area – and raising so much money for charity. Stuart said he now pulls in anywhere from $30 to $40 every weekend!

And according to his owner, the friendly kitty loves all the attention he's been getting. He's always ready to interact with more passers-by through the glass and pluck any bills they might want to offer him!

Watch him in action:

The strangest thing has been happening at the office on weekends. When we show up on Saturday mornings and sometimes even on Sunday afternoons, we find a couple dollars on the floor near the door. Now we knew no one was paying their invoice in singles, but we just couldn't figure it out. Well at least not until we decided to test a theory on our little #CashnipKitty. Apparently he's quite the hustler, playing all the late night partiers traveling by foot on 3rd, Friday and Saturday nights.

Does Your Cat Purr When You're Not...

Ever Wondered Why Your Cat HATES Water...

Is Being An INDOOR CAT Bad For Your...

What Food Banks Need From You This Fall

What Food Banks Need From You This Fall

The Intermittent Diet that Jessica Alba Adheres To (And Why It Works!)

10 of the Most Ridiculous "Pumpkin Spice" Products (That Really Do Exist!)

What Are Chicken Nuggets Actually Made Of?

The Best Coffee House in Each of the 50 States This Bengal Cat Loves Water... Watch How He Reacts To The Shower!