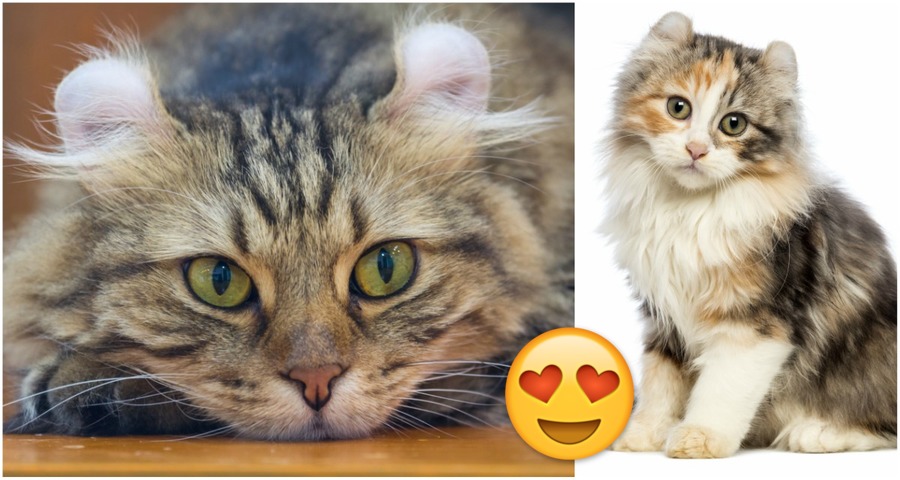 Find out more about this rare but incredible breed!

Where Do They Come From?

The American Curl was first discovered in 1981 in California: a gorgeous stray black cat with funny ears made herself at home on a couple's doorstep. Soon after, she had a litter of kittens. All of them had this strange yet beautiful feature!

It's caused by a natural, spontaneous genetic mutation. When kittens with this trait are born, their ears appear to be regularly shaped. However, within a few days after birth, they begin to curl, and once they reach their final curled state, they stay that way permanently.

Although this trait can make their ears a bit more delicate, there are no known defects or health problems associated with it. And because the gene is dominant, a kitten who has even one parent with the gene will have curly ears too!

What Are Their Prominent Features?

Most notable about these cats, of course, is their ears. The wavy and rounded-off appearance makes them very unique from other house cats with typical straight, pointed ears. The round shape almost echoes that of many wild cats, but the curl is entirely unique to this breed.

Their silky, shiny fur is another one of their prized qualities. They appear in a variety of colors, from browns and grays to oranges and whites. Their coats can be long- or short-haired, but either way they require very little grooming and don't shed much.

They tend to be quieter cats, often preferring softer sounds like purring rather than louder meows. Although they aren't very talkative, they have a great love for people and develop very close, loyal bonds with their humans.

Unlike many other cats, American Curls are typically good at adapting to change, whether it be new people, new pets, or new situations. This makes them great domestic companions, especially for families or people with other pets.

Although they're still a fairly rare and less-known breed, they are a beloved part of families all across North America and other parts of the world.

So what do you think? Would an American Curl make a perfect addition to your family?

Watch How This Cat Reacts to Koi...

35 Classic American Foods that Are Hard to Find Abroad

Satisfying Chicken Recipes that will Make You Want Seconds

Fried Chicken Recipes That Are Better Than Takeout

S'Mores and Other Uniquely American Foods

30 Twists On Grilled Cheese Sandwiches That Will Make You Melt

66 Rib-Sticking, Finger-Licking Recipes To Satisfy All Your Comfort Food Cravings The Ultimate Natural Remedy For A Sore Throat