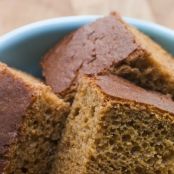 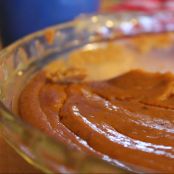 Make marinade: Mix together the first 4 ingredients. Keep stirring it until the cloves and cinnamon smell stronger than the vinegar.

Rince the roast off in the sink. Then place it in a large zip lock bag. If it doesn't fit, cut it into two similarly sized pieces and put it in two zip lock bags. Stir the mixture from step 1, then pour it over the roast. (If the roast is divided, divide up the marinade as well.) Then pour half ginger beer and half merlot into the bags with the roast until the roast is covered in liquid. Add raisons and dried fruits if desired. Seal the bags, letting out any extra air. (Ideally, place the zip lock bags with roast and marinade inside a large bowl to ensure that they don't leak.)

Place the bags containing roast into the refrigerator. Leave them in the fridge for two days. Turn them over at least once a day so that the marinade can absorb evenly on both sides.

After about 48 hours, the roast is ready to bake. DO NOT DISCARD MARINADE. Rub the roast in ginger snap cookie crumbs if desired. If not, just put the roast in a pyrex baking pan. Pour marinade, raisons and all, over the roast. The roast will only be partially submerged and that's fine. You can always add more of the marinade later if it doesn't easily fit into the pan. It will be baking for hours.

Put roast in 350 degree oven. Turn the roast over every 30-45 minutes or so. This is so it doesn't get dry and evenly marinates while it cooks. Just keep doing that until the roast is tender and ready to eat. The End!

If you sense that the roast is getting dry or cooking too fast on the surface compared to the middle, you can cover the pan with aluminum foil. Also make sure that the rack you use is in the middle of the oven, not too close to the bottom or top.

The Best Christmas Markets Around the World

50 Outstanding Vegetable Sides To Round Out Christmas Dinner

30 Things To Roast This Christmas That Aren't Meat