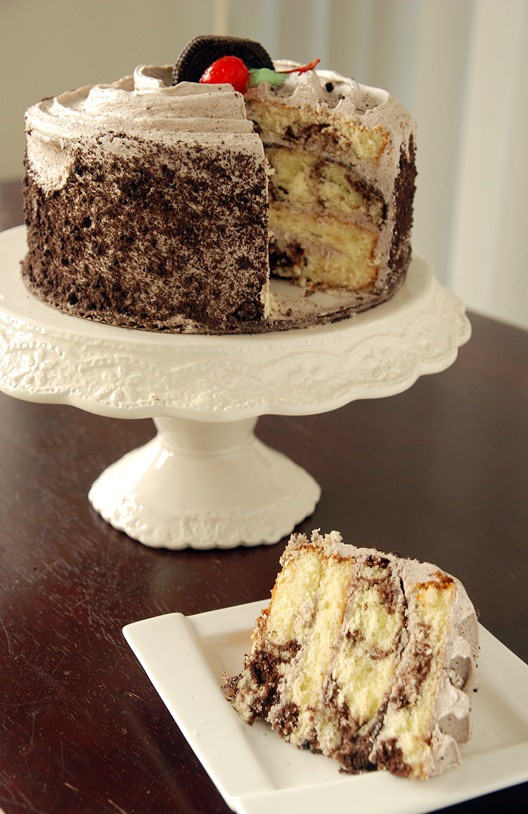 Sometimes on a very, very bad day I will eat store bought cake. I hate to do it because the prices are outrageous to me. Mass produced cakes for 19.99? When I could make one for $5 dollars or less?the cake also a marble cake with Oreo buttercream. 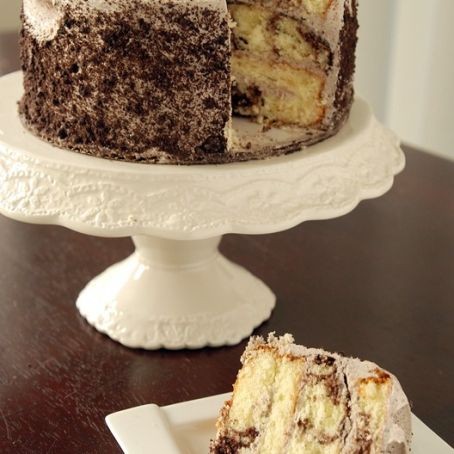 For the cake:
Preheat the oven to 350°. Butter two 9x2 inch round cake pans and line with parchment paper; butter and dust with flour. In a bowl, mix the 3 cups of flour, baking powder, and salt. In a cup, mix the milk with the vanilla.

Mix 2 cups of the batter with the melted and cooled bittersweet chocolate. Scrape the remaining batter into the pans. Dollop the chocolate batter over the batter in the pans and swirl with a knife. Bake in the lower third of the oven for about 35 minutes, until springy. Let cool for 15 minutes, then run a knife around the edges and invert onto a rack. Peel off the paper, turn the cakes upright and cool completely.

For the icing:
Lightly whisk egg whites and sugar together over simmering water in a double boiler until egg-white mixture is hot to touch or a candy thermometer reads 140°F (60°C).

Pour hot whites into a room-temperature bowl and whip at medium high, with a wire whip, until double in volume and stiff peeks have formed. When the mixer stops, the meringue should not move around in the bowl. Meanwhile cut up butter into 2-inch pieces. (The butter should be slightly moist on the outside but cold inside.)

On your mixer, remove the whip and attach the paddle. Add half the butter into the bowl immediately and pulsate the mixer several times until the meringue has covered the butter completely. To pulsate the mixer, turn it on and off in a jerky motion. This forces the butter on the top to the bottom of the bowl. Add the balance of the butter and pulsate mixer several times. Slowly increase the mixer's speed, starting with the lowest speed and increase the speed every 10 seconds until you reach a medium high speed.

Continue beating until the mixture begins to look light and fluffy. Stop the mixer and scrape the bowl. Reduce speed to LOW. Add vanilla and oreo, continue to beat on LOW speed for 45 seconds. Then beat on MEDIUM-HIGH speed for an additional 45 to 60 seconds.

Leftover buttercream can be placed in plastic containers with lids and kept in the freezer for up to 3 months. Defrost completely (several hours) and rewhip before using.

Storage: Store the icing in an airtight container and freeze for up to 3 months.

Recipe Note: I used 8 inch pans (and made it 4 layers) to make a taller cake. To do the swirl on top, use the rounded bottom of a large spoon. For the crumb side, use some of the Oreo crumbs and press on with your hand.

The most INSANE gravity-defying cakes you've ever seen...

We can't BELIEVE what this couple served at their wedding!

This Cookie Will Make You Rich
Dirt cake Dirt cake