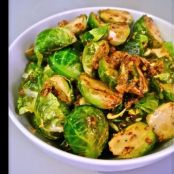 Peel onionand chop into 1/2 inch pieces. Trim the stems of the Brussels sprouts, remove any dark leaves, and cut each in half through the core.

Place the Brussels sprouts in a bowl, add the melted butter, vinegar, nutmeg, and bacon, and stir until combined. Serve immediately.

The Best Coffee House in Each of the 50 States

You Should NEVER Eat These Foods Before Going To Bed!

Eat As Much As You Want Of These Low-Cal Foods

Popular Food Combinations You Should Actually Be Avoiding