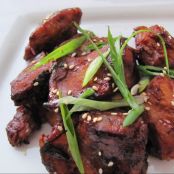 Heat Oil in a large skillet on medium high heat wait until the skillet is HOT like the Oil just starting to smoke hot
Season Chops with Salt and Pepper and cook them until browned on both sides now cook them another 4 to 5 minutes on each side, don't burn them, watch them carefully Place Pork Chops on a plate and cover tightly with foil

Now put the other remaining Whiskey mixture ino the hot skillet while scraping the bottom and sides of skillet And bring it to a boil Keep stirring until its reduced to a thick glaze about 3 to 5 minutes
Now reduce heat to medium low and put the juices from the Pork Chops into the skillet Don't let Pork Chops fall into skillet, ONLY the juices

Now add the remaining 2 Tablespoon of Cider Vinegar to the skillet and whisk in the Butter and simmer the glaze until it gets thick and sticky about 2 to 3 minutes Remove skillet from heat. Now return the Pork Chops to the skillet and turn them until they are all coated with the glaze about 5 to 6 minutes
Transfer to a platter and pour remaining glaze over the Chops

10 amazing ways to make zucchinis better than they already are

Have mo' fun with this delicious Bo Bun!

The 24 burger toppings you need in your life