The "Bites" isn't the old fashion part, but more of a modern version of the corndog, itself. People like "bites." There's cheese bites, chicken bites, potato bites, veggie bites. There are convenient to eat since they are more bite-size. Children like them. They make a good finger-food. Or, if you prefer the old-fashion "Carnival Corndogs," just push a wooden stick into them and then deep fry for your authentic corndog.
With corndogs, you never have to worry about not enough hot dog buns in a package to go with the package of hot dogs. Never could figure that one out.......You'd think after a hundred years, they would have gotten it right by now.
But why you squander a thought? Well it's my belief that meat packers like meat in pounds and, well, our commercial bakers like their "baker's dozen." And, most hot dogs come 10 to a one pound package except for the few that now make "Jumbos" with 8 to a package. And, that big ole' dog is just too much meat in proportion to the bun. Just not the same. Although you can get the buns in an 8 or 12-pack.
Consumers just never put up a big enough fuss, so the proportions of our available dogs to buns will most likely stay the same for another century......Ditto! 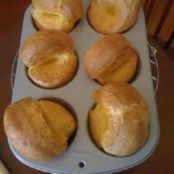 Mix all the ingredients except the cornstarch which is for dredging. Add water until it is of good dipping consistency, but not runny. Batter should be fairly thick.

Cut up hot dogs into 1-inch slices. Toss them around in a bowl of cornstarch for the batter to stick. Then dip the pieces into the batter.

Deep fry in oil until golden brown and drain on paper towels.

To make the Carnival Corndogs, just use whole dogs and push a stick all the way into them from one end, deep fry in oil until golden brown and drain on paper towels.

We are definitely making these Easy Cheesy Mini Pizzas for our next party!

20 easy dishes to bring to parties

10 cheap and delicious foods to make healthy eating a breeze