Mix brown sugar and butter for topping. Crumble mixture over the top of apples and sugar mix.

Preheat oven to 350 and bake until golden brown, about 3/4 of an hour.

Adjust butter and sugars to your liking. I always use less brown and white sugar. Sometimes I add a bit of nutmeg with the cinnamon. 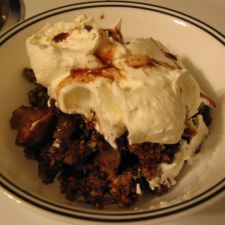 15 ways to eat your veggies for dessert

45 comfort foods to satisfy your cravings

Out of the teapot, into the oven: 10 brilliant bakes with rooibos tea
Apple Crisp Low Cal Apple Crisp