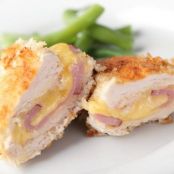 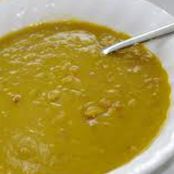 Boil the ham bone until the remaining meat falls off. Remove the pieces of meat and the bone from the broth and set it aside to cool.

Combine meal, flour and onions then add cooled broth until you have a stiff mixture (scant 2 cups). Once you get a stiff mixture that holds together, stop, even if you haven't used all 2 cups.

Add eggs, one at a time, to the mixture. The mix needs to be thick enough to drop by spoonfuls into the cooking broth. If one egg gets you to this stage, stop. If it's still really thick, add the other egg.

Bring the ham broth back to a boil while you're mixing the dumpling mixture.

Drop the dumpling mixture by tablespoonfuls into the boiling ham broth. Cook about 20 minutes, until onions are tender and dumplings are cooked through.

Add the ham back to the broth and dumplings.

Cook the dumplings in an open pot, and don't stir, or they'll turn to mush.

Be careful with the dough, especially at step 2. You can always make it a little thinner, but if you get it too thin, you can't thicken it back up - not easily anyway.

We are definitely making these Easy Cheesy Mini Pizzas for our next party!

The guide to perfectly flipped foods