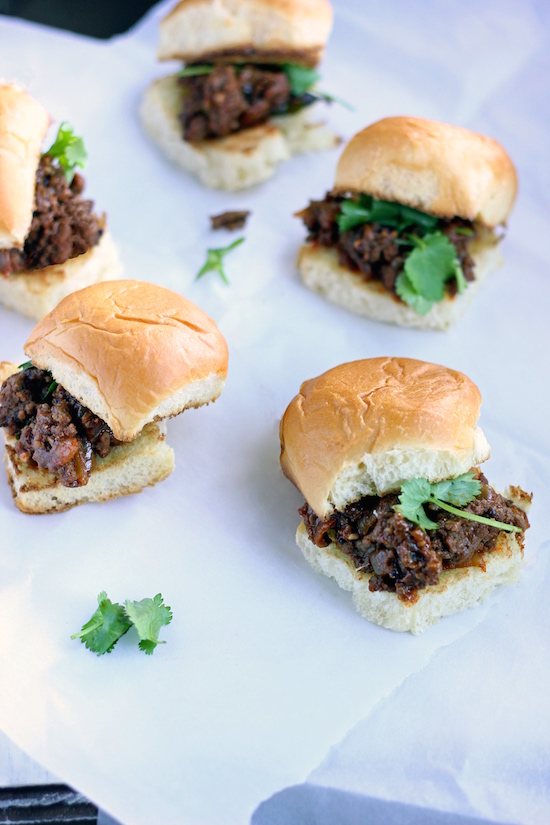 Sloppy Joes get an Indian makeover.

Trust us, you've GOT to try these! 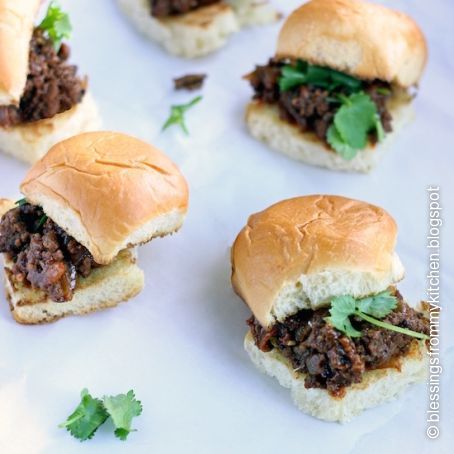 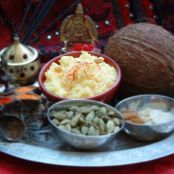 Heat oil in a large skillet over medium heat, until it shimmers.
Add the chopped onion, saute until translucent.
Add garlic, ginger, stir until they cook down, about 1 minute.
Add the diced tomato, cayenne, coriander, cumin. Stir once around to combine. Add beef. Take heat to high and stir beef until it sizzles and is slightly browned (it won't cook all over, but the idea is to create a slight browned crust throughout parts of the meat.
Add pepper, salt, water and bring meat mixture to boil.
Once it reaches boil, reduce the heat and stir in ketchup, Worcestershire sauce and sugar.
Simmer, half covered until meat cooks through and mixture thickens, 8-10 minutes.
Turn off heat.
In the meantime, turn on oven's broiler.
Separate Hawaiian rolls, lay on lined baking sheets, white sides up. Spread with butter.
Place under broiler, I minute, or until browned, keeping an eye not to burn.
Take rolls out and place 1-2 tbsp filling onto bottom part of bun. Sprinkle with cilantro.
Cover with the top part of roll.

Feel free to adjust the cayenne pepper, spice powders to your level of comfort.

Ginger is a delicious spice, but it can be hard to peel it without wasting. In this video we show you a quick trick to peel ginger like a pro, minus the waste! 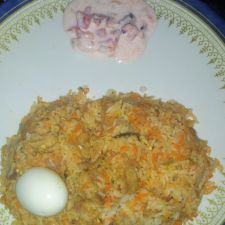 Find Out How To Consume This Food and Eliminate Excess Fat

Drink This To Get A Flatter Stomach

For Some, Cilantro Really Does Taste Like Soap, And Genetics Are To Blame
Indian Rice Pudding Chicken biryani south Indian style