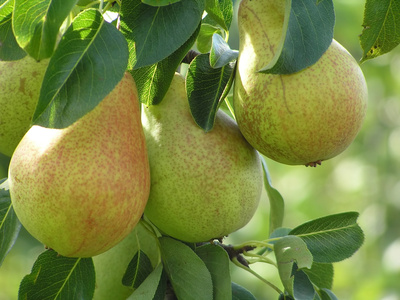 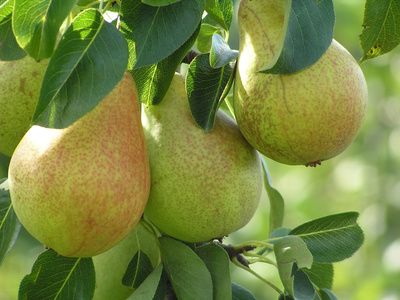 Pears have been enjoyed as food since prehistoric times, but the Romanians take claim on cultivating the fruit.  The popular fruit now produces over 3,000 known varieties.

Comice - A popular pear because of its sweet flavor and smooth skin. These pears boast a sweet and juicy flavor and are best enjoyed raw.

Bartlett - The bartlette pear is the most common of the pear varieties, and is what you mostly see in your local grocery store and is typically the pear used in canning.

Bosc - This winter pear has a bit more crunch  and is great for cooking.

Anjou  - This egg shaped variety is the second most common pear seen in grocery stores. The colors of these pears barely change as they become ripe, so keep an eye on these when they're on your counter!

Seckel - The smallest of the commonly seen pears in the United States, but they are also the sweetest!

Pears are high in vitamin C and dietary fiber

The majority of pears produced in the United states are grown in the Pacific Northwest. You will start seeing more pears in markets late summer all the way through the fall until the winter.

How to pick it

Pears are a climatic fruit, so most are harvested before they are fully ripe. When searching for a pear at the store look for one that is firm in texture, looks healthy and has little to no bruising. Pears are ripe when the top stem becomes easy to remove.

How to store it

Pears can be stored on the counter top until they ripen. Once ripe, they can be stored in the refrigerator an additional 2-3 days.

Winter pears can be purchased mature but not ripe and stored for 3-5 months in 30 degree temperatures, while Bartlett pears can also be stored though the winter but  will only last around 2-3 months at this temperature. When you are ready to eat your stored pear place on the counter top at room temperature until the pears becomes ripe.

How to prepare it

Pears can be prepared in numerous ways. They can be simply eaten raw, dried, stewed, in desserts and accompanying meats.

For your little one: Pear and Avocado Baby Food

- Getting antsy? Speed up the ripening process of your pear by placing it in a brown paper bag with a banana.

- Try the savory combination of pears with Blue cheese!

- Don't ever store pears in a plastic bag. They are sensitive to carbon minoxide.

Pears cause the least allergic reactions out of all fruits. That’s why they are typically the first fruits introduced to babies.

All About Strawberries Gourmandize and Club W