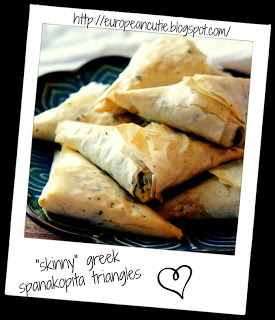 This is my healthier version of the traditional greek spanakopita..enjoy! 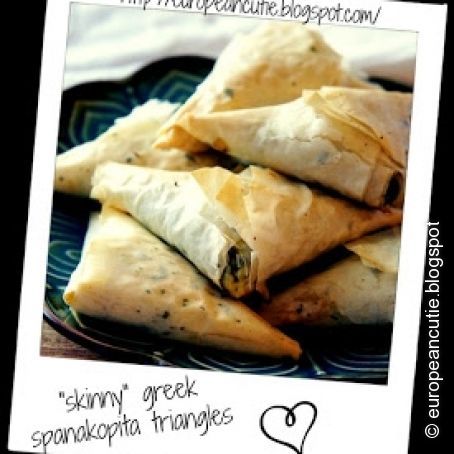 *This recipe takes some time to make, so I don’t recommend this for a week night. Save it for a weekend adventure in the kitchen.

If your phyllo pastry was in the freezer, take it out several hours beforehand so that it thaws.
In a large skillet heat the olive oil on medium heat. Add the chopped onions and saute them until soft {about 7 minutes}. Then add the frozen spinach, salt and pepper, and lemon juice. Saute until the spinach is limp and heated through.
Now this part will take some time as you need to let the spinach mixture completely cool so that it doesn’t make the phyllo dough soggy when you are assembling your spanakopitas. {I got impatient and stuck the bowl in the freezer and kept stirring it around every few minutes to let heat escape.} Once the spinach mixture is cooled, check to see if there is excess liquid. If there is, place the mixture in a colander and squeeze it out.
In a medium bowl, beat the eggs with the feta and nutmeg. Add this to the spinach mixture and stir until everything is mixed well together.
Preheat the oven to 350 degrees and brush 2 baking sheets with some melted butter or cover with non-stick cooking spray.
Unroll the phyllo dough and lay one sheet flat, vertically in front of you, on your {clean and dry} work surface. Be sure to cover the remaining phyllo dough with a damp towel or else it will dry out. Brush the sheet with melted butter, then sprinkle some oregano. Layer a second sheet of phyllo dough on top of this first one and repeat the steps of brushing with melted butter and sprinkling with oregano. {I don’t recommend 3 sheets, I was told it gets to be too much phyllo. Like a bit too dry.}
Using a pizza cutter, cut the sheets lengthwise into 4 long pieces, about 2 inch strips. Place a heaping spoonful of the spinach mixture near a corner of the phyllo strip. Fold the end at an angle over the filling to form a triangle. Continue to fold the triangle along the strip until you reach the end, like folding a flag. Repeat this with the remaining phyllo sheets and filling. You should use up 12 phyllo sheets, making 24 spanakopitas. And don’t worry, folding the first one seems tricky but then you get used to it and it goes by quickly.
Place your spanakopita triangles on your baking sheets and brush them with butter. Bake them for 20 to 30 minutes until the triangles are golden brown and crisp enjoy!

How to make spiralized zucchini pasta with pesto and feta

24 recipes that will make you worship spinach