Vichyssoise it sounds so fancy, but it’s really just a tasty, filling, and inexpensive soup that only has 5 primary ingredients. The traditional Vichyssoise soup is often served cold and made to be completely smooth and white. My version is served hot with chunks of potatoes and sliced leeks for texture. It’s super delicious and, by the way, has less fat and calories than the original. 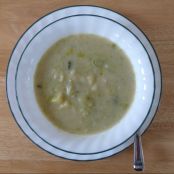 Potato and Leek Soup with Spinach

Place peeled and sliced potatoes into a large stock pot of cold water and bring to boil. Cook until fork tender, slightly under done. Remove from water and set aside

Clean leeks well (see below for tips on cleaning leeks)

In a stock pot sauté onions, carrots, celery, and salt/pepper (to taste) over medium heat until tender

Add chicken stock, bay leaf, thyme, and 1/3 to ½ of the potatoes bring to a boil, then simmer 1 hour or until vegetables begin to dissipate into broth

Add the remaining leeks and potatoes, continue to simmer until tender about 20-30 minutes

Add half & half stir and heat until hot, serve

Leeks tend to have dirt and sand caught in their lower stalk. I clean them 2 ways to make sure they are ready for the pot. 1st slice the green tops off then leaks leaving only the white stalk. 2nd remove any damaged outer leaves. 3rd slice the leaks in half but leave the leak attached ½ inch from the root. 4th Under running water clean each layer of the sliced leek 5th+ (2nd way) Submerge the cleaned leeks in water and agitate leek to force any remaining dirt/sand to the bottom of the container 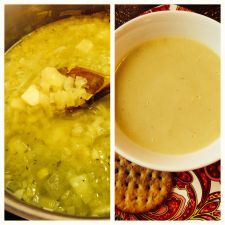