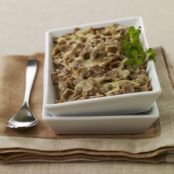 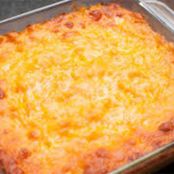 Cook spaghetti noodles. Drain and then stir in butter, parmesan cheese and eggs. Divide pasta mixture between the 3 pans.

Cover 2 pans with saran wrap and then with foil. Include directions for later cooking. ** Thaw pie. Remove plastic wrap and re-cover with foil. Bake, covered for 25-30 minutes at 350 degrees. Remove foil and bake another 5 minutes more until cheese is lightly browned.

For pie that isn't frozen, bake covered at 350 degrees for 25-30 minutes. Uncover and bake another 5 minutes until cheese is lightly browned.

How To Weave the Perfect Lattice-Top Strawberry Pie

Ditch the pie pan with these 11 mouthwatering rustic fruit tarts

The 20 Things You Should Always Have In Your Freezer, No Matter What
Baked Chicken Ziti Beefy Noodles (leftover gravy)