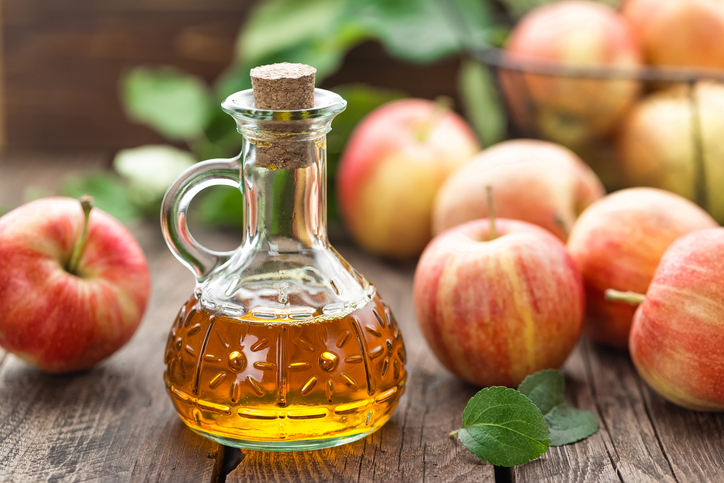 Miranda Kerr and Megan Fox swear by it...

what is apple cider vinegar?

Apple cider vinegar is made by exposing crushed apples to yeast. The fruit sugars ferment, turning into alcohol, at which point bacteria is added to transform the alcohol into acetic acid — a.k.a. vinegar.

Apple cider vinegar contains only 3 calories per tablespoon, which is very low!

IS IT REALLY THAT GOOD FOR YOU?

Apple cider vinegar (or ACV) has been used for centuries in home remedies and folk medicine, and has recently enjoyed a surge in popularity as a type of healthy elixir.

It has been touted as a silver bullet to fight diabetes, lower cholesterol, protect gut health, boost energy and most recently: stimulate weight loss.

But when it comes to claims over weight loss, is there any science to back this up? Let's take a look.

In a Japanese double-blind study of obese adults, participants were divided into three groups: every day for three months, one group drank half an ounce of apple cider vinegar, another group an ounce, while the third group drank no apple cider vinegar at all. At the end of the study, those who drank the ACV lost weight 2.5 to 4 pounds, and had reduced belly fat, waist circumference and lower blood triglyceries, compared to the non-vinegar group.

While this may seem promising, it is important to note that the difference in fat loss was relatively minor considering the rate of loss over time (1.3 pounds per month).

On the other hand, there is relatively strong evidence to indicate that ACV can help improve insulin sensitivity and regulate blood sugar levels (1, 2, 3, 4, 5). So what does that mean for weight loss?

Blood sugar spikes and crashes can be responsible for binge eating behavior. When blood sugar levels are low, people can feel weak, dizzy or lack focus — we often treat these lulls with quick snacks or sugary foods, to give ourselves an energy boost. However, frequent snacking can lead to weight gain, as we ingest more calories and sugars (which are stored as fat). So by regulating blood sugar level, apple cider vinegar also helps us resist the urge to eat more than we need to.

Well, first off: don't go guzzling apple cider vinegar like you'll drop 10 pounds tomorrow. Overdoing it on ACV is decidedly not good for you, and can wear away tooth enamel, irritate the esophagus and stomach, and low potassium levels in the body. As with everything, moderation is key.

All you need are two tablespoons of apple cider vinegar mixed with water (honey optional), and voila! Otherwise, drizzle it with oil over your salads and vegetables, and you will have all the beneficial effects, without extremes.

Falling in love? Here are more amazing things you can do with vinegar.