I created this original recipe for a couple of my best friends who had recently become vegetarians. They like hot, spicy dishes like I do and they really enjoyed these. I served them with a fresh spinach leaf, dandelion leaf, tomato, mushroom, shredded jicama and julienned Anaheim pepper salad with a simple vinagrette with citrus and a dash of habanero hot sauce. I am not a vegan and when they were done, I was skeptical because they just didn't look right, no melted cheese on top or oozing out of the enchiladas. But, I have to admit, I really enjoyed them too. If they are too hot and spicy for you, use fewer hot peppers or use
milder peppers. See below for variations that aren't totally vegan. 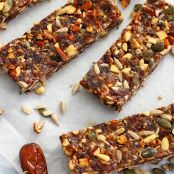 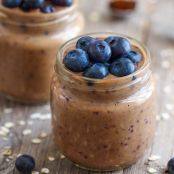 Roast poblano, jalapeno and habanero peppers over a flame, under broiler, or on a grill til charred black. Put in a bowl, cover with plastic wrap, and set aside to steam for 10 minutes. Heat 1 tablespoon oil in a sauce pan on medium. Add onion, garlic, cocoa, 1 teaspoon salt, chili powder, cumin, oregano, paprika and the chipotle powder. Cook, stirring constantly, til veggies have softened but not browned, about 5 minutes. Remove from the heat. Peel and chop peppers, add
to pan along with tomatoes, tomatillos, broth, tequila, and cilantro. Return to medium heat and bring to a simmer, uncovered, til the liquid reduces slightly and
tomatoes are broken down, about 10 to 15 minutes. Puree in the pan with an immersion blender or in a blender, using caution & covering the top with a towel.
Set aside. Preheat oven to 425 F.

While sauce simmers, put peppers, mushrooms and red onions in a single layer on rimmed baking sheet. Drizzle with 2 tablespoons oil and sprinkle with salt
and pepper. Roast at 425 F, stirring halfway through, til the veggies are tender & lightly browned, about 15 minutes. Put in a large bowl and stir in beans. Reduce oven temperature to 375 F.

Assemble enchiladas by spreading 1/2 cup of sauce in a 9 x 13 inch baking dish. Put a skillet on medium-low heat. Brush both sides of a tortilla with oil. Heat in the skillet for 5 to 10 seconds per side til soft and pliable. Spread 1 tablespoon tofu, 1/3 cup of the filling and 1 tablespoon sauce down the middle of tortilla and roll it up. Put seam down in baking dish. Repeat til all 12 tortillas are used. Spread remaining sauce and filling over the enchiladas. Top with dollops of remaining tofu. Bake, uncovered, at 375 F til hot, about 15 minutes. Serve garnished with sliced green onions and chopped cilantro, if desired.

I like to add soft, crumbly goat cheese or shredded pepper jack cheese to filling instead of tofu.
I also like to sprinkle 1-1/2 cups shredded cheese over top of my enchiladas such as cheddar, Monterey jack, etc, or even some crumbled goat cheese.

What to eat when you can't have meat?

Fool Your Carnivore Friends With These "Meaty" Vegetarian Recipes

Vegan, Paleo, Gluten-Free... Here's how to make cookies for every dietary need

30 taco fillings you won't believe you never tried before