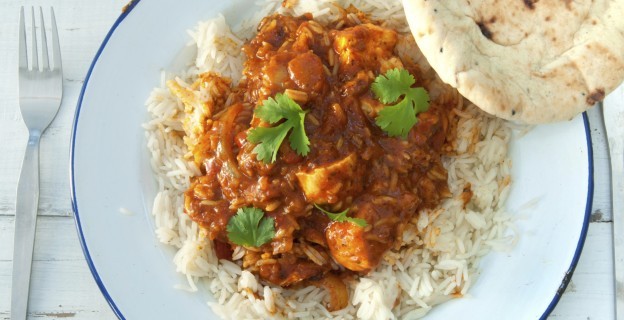 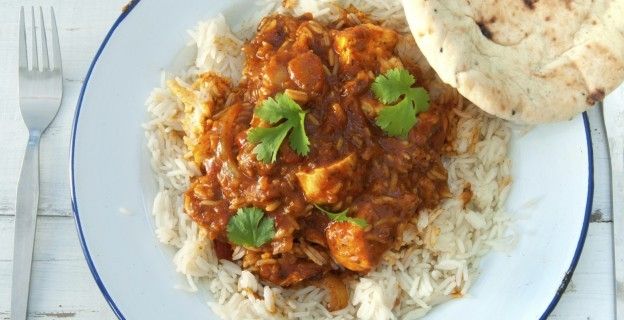 The basic principle behind Indian cuisine is the combination of hot foods and warm foods in order to achieve a subtle blend of basic flavors (salty, sweet, sour, spicy and bitter). This balance is important for every dish, since there are no courses in an Indian meal; instead, all of the dishes are served at the same time.

Indian food is hugely varied largely thanks to the diversity of it's different regions, but also due to the many waves of immigration that have occurred throughout history and thus influenced the cuisine.

In the United States, Indian food is often synonymous to very spicy food. Which is odd since chili peppers only arrived in India after 1500, thanks to the Portuguese. Indians very quickly adopted the chili pepper and started incorporating it into their own food. They would reduce the chili into a paste using two large stones, a bit of oil, ginger and salt. This was the only form of seasoning that millions of Indians in poor, rural areas had to accompany their staple meal of rice.

Indian food is also often equated to the word 'curry', even though the term is severely overused.  The word 'curry' was originally invented by the British in order to describe, in a quite generic fashion, the spicy dishes that were prepared by the Indians. Before this severely reductive word was put into place, every dish had a specific name, which of course is still the case in contemporary Indian cuisine.  jalfreizi, le rogan josh, le korma, le dhansak, le balti, le vindaloo, etc.

By extension, the word curry is also associated with a mixture of spices that is the foundation of Indian cuisine. But in India, curry is not used as a powder. Curry  powder was originally created for the British who were leaving India, and it’s objective was to make cooking easier for them. That said, Indian cuisine does contain various mixtures of powdered spices, like masala or garam masala, but they’re mainly used to finish seasoning a plate once it’s been cooked. Women also tend to blend their own spices, by mixing them with a mortar and pestle right before cooking.

To make the base of Indian dishes, local cooks proceed in the following manner: the spices are placed on a large stone and ground to fine powder, usually with a stone shaped like a large rolling pin. Women prepare spice blends each morning to be used throughout the day. The same stone is then used to mince onions, garlic, chilies and fresh herbs like cilantro. They also use the stone to blend the pastes to which they add the powdered spices and the meat or vegetables before cooking.

In order to recreate this in your own home kitchen, my advice is to toast whole spices like coriander and cumin seeds, before crushing them with a mortar and pestle. Then add them to some turmeric, minced garlic and ginger. Then all you need to do is sauté this mixture in a hot pan, along with some sliced onions, in order to create the perfect base for a curry. You can also use high quality pre-made curry blends, but don’t forget to toast your spices before using them in order to get maximum flavor.

If you’re ready to dive into the world of Indian cuisine, check out these authentic recipes to get you started,

Hot and Spicy Chicken with Rice